Serving the Greater Louisville Area for over 70 years!

In 1939 Philip Clements started Fulltone when he began developing Black and White film in his own basement.  For three years he and his wife, Mai, ran the business from their home until moving into another basement, that of the Republic Building at 5th and Walnut in 1942.  After four successful years at the Republic Ban building, Fulltone was ready to move yet again, this time  to 5th and Guthrie in the downtown area, above a five and dime store.  In 1955, nine years later, the business had grown to the point that the facility at 1404 S Shelby Street was built.

Even with this new location, Fulltone was still a photography lab that only processed blac and white film.  It wasn’t until 2 years later, in 1957, that color gained enough popularity that Fulltone would expand the building to enable the process of color film.  Business continued for another 11 years until Fulltone expanded yet again in 1968, to include the process of Kodak’s revolutionary film, Kadachrome.  Fulltone was one of the only 50 labs in the United States licensed by Kodak to offer this service in house.

Thirty-one years would pass until Fulltone expanded again.  In 1989, not just content to move to another location, Fulltone would add the addition of a second store.  Recognizing the appeal of “One Hour Labs”, Fulltone Fast Foto opened in the Eastgate shopping center in middletown.  Besides just offering a fast turn around for film photographers, the world of digital . photography was beginning to catch on, and the new store in Middletown offered this service as well.  For nineteen years Fulltone offered two locations to serve greater Louisville, until in 2008, when the store at Shelby Street was closed and all operations were transferred to the Middletown store.

Then after twenty-one years in the Eastgate shopping center, the neighboring Kroger store set out to renovate and expand their space.  Because of this our lease in the Eastgate shopping center was unfortunately not renewed after August of 2010.  Not to let our customers down, we made a short move down the street to 10276 Shelbyville road where we were located for 3 years as we transitioned into a Mail order Outlab.

We continue to offer the best quality film processing and printing as well as exciting new products lie canvas, custom framing and photo gifts.  As a photography lab we specialize in older “Legacy” film and printing.  We are proud to be the ONLY lab in the Louisville area that can still process traditional Black and White film (Like we have since 1939) and E6 Slide Film.  While many labs send their film out to “Out Labs” that can take 2-3 weeks or more, our film is usually processed, printed and ready to be picked up in just a few days.  We are currently sharing space with The Print Refinery allowing us to share in similar resources. 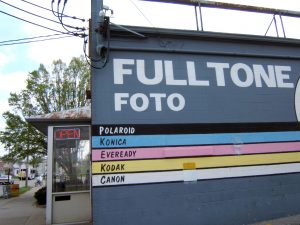